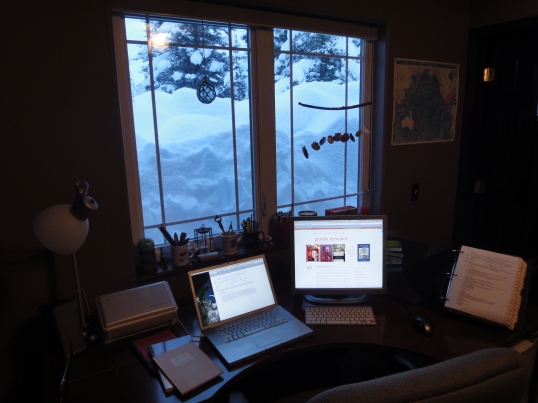 Hoping the snow remains on the other side of the window.

Valdez has had a bit of snow this winter, as you can see out my window. Believe it or not, I’ve shoveled three feet or more off the top. I hope that what remains on the roof now has room to land without invading the study and burying computers.

Living in Alaska is a lot safer than driving freeways, turnpikes and city streets, but certain dangers are more spectacular. Hiking in bear country, kayaking in chilly waters, and, most recently, driving roads also used by moose are all worth the risk, but also remind me of the Barzun projects that I don’t want to leave unfinished.

There’s nothing especially noteworthy about today’s post; it is simply the first that records a Barzun item scanned: “The Colossus Laid Out” (American Scholar, vol. 53, no. 4, Autumn 1984, pages 546, 548–549).  It’s fitting for me to begin here, however, as Barzun’s review is of Dan H. Laurence’s monumental two-volume bibliography of Bernard Shaw’s works.

I hope that the tags I’ve attached to posts like this one will help Internet search engine users to find subjects that interest them, whether Barzun, Shaw, Dan Laurence, or Marie Belloc Lowndes.  (Finding lasting value in the work of Hillaire Belloc’s sister, Barzun differs with the editor he praises in just about every other way.)  I’ve also added “Translation” to this site’s Categories to distinguish those instances when Barzun offers translation criticism – as he does in “Colossus” – rather than being the translator himself.  When a passage pops out at me, like the one that follows, I’ll quote it:

The fresh details in the Bibliography and the reminder of old ones demonstrate again that the best way to be truly civilized and full of caritas as Shaw was is to have a fair and calm opinion of oneself and to vent one’s disapprovals fiercely, but in the tone and manner of candid conversation.  [p. 458]

Barzun, as usual, has more and better things to say in this review-essay.  It is not the source, however, of the fitting quotation I had in mind when deciding to begin with “Colossus”: “Bibliographers are the unsung heroes of the intellectual life.”  That opening line from Barzun’s preface to A Dictionary of Parisian Music Publishers, 1700–1950 by Cecil Hopkinson (Da Capo Press, 1979) has reinvigorated me when this labor has been most tedious.   I began making a Barzun bibliography because of memory lapses like that one of attribution.  Rereading Barzun is refreshing in many ways.