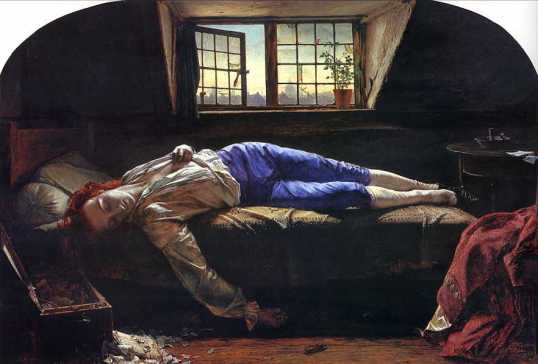 The double disaster of the Great War and the influenza pandemic of 1918–1920 touched young Jacques Barzun and his Columbia classmates.  By 1926, when this nightmarish short story (about 2,200 words) appeared in The Columbia Varsity, the student body included war veterans and many more who had witnessed sudden death from La Grippe – the “Spanish” flu – that caused half a million deaths in the U.S. alone.  The subtitle reference to Othello (III.iii.330) seems intended to rule out drugs as the cause of the hallucinations in “Fantastique”, though Iago exults that if his malevolent scheme succeeds even opium would not quell the Moor’s agony.  Whether caused by influenza’s fever or something else, malignant thoughts dominate in Jacques’ “Fantastique” which begins:

“In the center of the dark cube, the body of the youth lay tossing ceaselessly on a narrow bed.  He was tortured from all sides.  The central rafter, instead of supporting the ceiling, was heavily braced against his ribs, just above the heart.” Internal trouble adds to the agony as “a frequently spouting geyser of blood” in an empty skull condenses into “cool droplets which dripped slowly down the parietal and temporal walls”.  His mouth is frozen and his ears suffer:  “Above the pumping heart, a bronze cymbal was beating the ponderous accompaniment to Berlioz’s ‘Symphonie Fantastique.’  The reverberations were felt as convulsive vibrations throughout the long and empty shell of the body.”

The cube changes position now and again, and sounds from the baseball diamond add to the din – gloves popping, bats cracking, and the “monotonous voices of many umpires …. The game was interminable as well as repetitious.”  Sensing that he must do something if the game is to end, he tries multiplying by threes but fails.  “Disheartened, he was sinking in exhaustion, surrendering to the weight of the beam, the clang of the cymbal, the rush of blood, when he had a veritable inspiration.

“He would establish on the wall, in full sight of all malignant forces, the liberating proposition of Pythagoras,” and end his suffering with a logical proof.  The crushing beam becomes his hypotenuse, its shadow one side, while the third side of the right triangle has to be imagined, along with “the other construction lines necessary to the proof.” Again the attempt to impose order is thwarted as his alphabetical sequence of angles vanishes before he can finish the labeling.  “Finally, he hit upon the expedient of visualizing all the letters at once in their relative order; and lo, they remained fixed.”

The cacophony continues, however, as the youth becomes aware of “a breathing presence near the bed” – an ugly, menacing demon with a hot soldering iron.  “The bewildered youth looked again at the reality of his right angle triangle and wrote the first line of the proof, hurriedly,” but “the figure bent over the occupant of the bed and drew with the iron a firm line from diaphragm to navel.”  The youth tries to continue, “but the obese spirit kept the iron hot and ready against any attempt to complete the proof which meant salvation.”

“Suddenly the youth saw a long shapely hand writing very fluently the succeeding steps of the lengthy demonstration.  The cymbal and blood redoubled their annihilating efforts in proportion.  Yet, when the final Q.E.D. had been traced in needlessly elaborate Gothic, the entire figure appeared, smiled at the monster near the bed and, by adding a charcoal line here, and an inked feature there, made it vanish part by part into the great void beyond the cube.

“As the angel of mercy approached the head of the bed, the ball game gradually came to a stop; the beam lifted its weight into position; the Fantastique turned into L’Enfance du Christ; though the blood kept rushing to the head and down again even more vertiginously than before.  It had blond hair cut rather short and carried what seemed to be drawing and painting materials.  The angel was about to speak when … ” [ellipsis in the original]

As in a dream, a play, or the first Berlioz symphony, the scene shifts abruptly in section II.  The cube becomes a lake, “cold green and bottomless”, though “an immobile sun caused the blood and brains of the youth to boil and bubble till it seemed as if the cranium must burst open.”   He decides not to pray for relief from the angel of mercy “because the last time, he remembered, he had not believed in God.”  That determination causes the sun to recede and the lake to freeze.  “For no definable reason, he knew he was going to die.”

Section III portrays the youth making vainglorious plans for his death.  He drafts a letter to the demon congratulating him “in perfect irony.” Next comes a postcard to the angel.  “After this tender communication, he turned his attention to the draft of a letter to the Times, signed with a fictitious name, deploring the death of one so young, so gifted, and so pure.  He expiated on his qualities, as exemplified in his private life as well as in the numerous artistic, literary, and even political activities which had engaged what he admitted to be his genius.  He spoke of Chatterton, Keats, and ended with a moving passage from ‘Lycidas.'”

He expects to be included in the series “Last Words of Famous Men and Women” and anticipates his own for the editor: “‘This has been a weak end,’ a sardonic pun on the double fact that he was to die early Monday morning and in bed.”  He finishes with “a firm, manly letter to his parents, expressing gratitude, admiration, and love, with an obligato of disillusionment and superiority to circumstance.”  Done at last, “he felt calmer, though he realized that being desperately ill, the end might come at any moment.  Secretly he was afraid that someone would call the doctor.  He might cure him and spoil everything.  It was unthinkable.”

The final scene opens with the morning sun as disembodied voices discuss his likely recovery.  “Before he fell asleep again, he succeeded in grasping the idea that by one stroke, Nature and medical science had conspired to shatter all his plans: gone were the letters, the premature end, death-bed apostrophe, and unfulfilled genius.

“And now the doctor and the nurse and everybody had contrived to rob him of his apotheosis.  …  He would fool them yet.  … Was the nurse in the room?  No.  The door was closed.  It was a shame from their point of view, but they would have to learn what it meant to thwart Destiny guiding the life of Genius …”  Unwilling to wait for cold, excitement, or Providence to kill him, he gropes his way to the bathroom.  “He reached the bath exhausted, and slumped on the mat.  His position was to him ineffably tragic.  Tears rolled down his cheeks.  He thought of an eloquent passage in the Poetics; of Longinus on the Sublime.  He summoned sufficient energy to turn on the cold water in the tub.  He cursed because it made such a noise; when there was about five inches in the tub, he turned off the tap, stripped, and lay down with a convulsive shudder in the cold water; his body half-twisted sideways, knees bent, his head on his folded arms, face touching the bottom of the tub.  He lay there shivering and sobbing quietly until he was dead.”

The haunting effect of young Barzun’s vaulting imagination is as Gothic as the angel’s Q.E.D.  Symmetry, smoothness, perfection are not his aims.  Nor do the excerpted passages preserve the full effect of Jacques’ phrasings.  Anatomical descriptions of bodily pain provide a certain detachment, but the youthful mind’s struggles are fully exposed.  After reading “Fantastique”, some will find a new reason to marvel that Barzun yet lives, beyond 104.  Turning early bouts with depression into literature may also be interpreted as his compounding of an antidote, for himself and others.  In any case, those tempted to conclude that Barzun embraces existential despair ought to first read his “Ça existe—A Note on the New Ism” in The American Scholar, volume 15, number 4 (Autumn 1946), pages 449–454.  Note the date; as usual, Barzun is ahead of the avant-garde.

An afterthought:  Since Jacques graduated at the head of the 1927 class – despite the “frequent depression” he mentioned in an interview with Christian Bauer (about Cornell Woolrich) – Barzun must have possessed a Lincoln-like ability to keep working when miserable.

The Christian Bauer interview with Barzun may be heard at Mr. Leo Wong’s Jacques Barzun Centennial Celebration website.  (Click on Mr. Bauer’s name in the right-hand sidebar.)  The “frequent depression” reference is recorded on “Side A” shortly after the 7 minute mark.