Archive for the tag “Dickens”

Publication by giving speeches is another way that Jacques Barzun’s influence spread.  There were many occasions when what began as a lecture soon found it’s way into print.  A dinner at the Institute for the Humanities at Salado (Texas) in the fall of 1988 supplies an example.  Barzun’s address, “The Paradoxes of Creativity,” went from spoken words to printed with the American Scholar‘s Summer 1989 issue (pp. 337–351).  Some of the original atmosphere is recovered when audience questions and Barzun’s answers follow his talk as published in Creativity: Paradoxes & Reflections (Chiron, 1991). 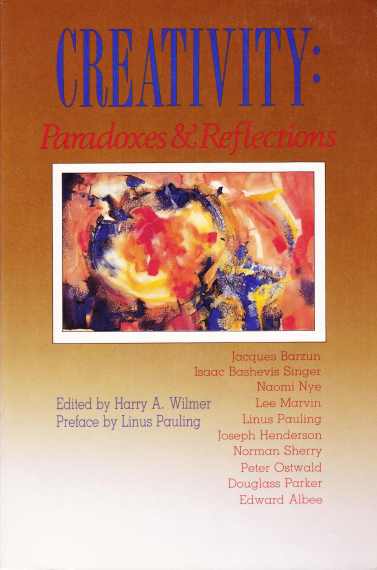 The Institute’s dinner/lecture series had a more inviting title: “Creativity, Alive and Well.”  Barzun’s challenge to complacency is reflected by some responses from the audience during the Q&A session: “Must one be a genius in order to create?”; “I was concerned about your comment that this was an end of an era of creators.”; and “Is it not true that the pedestrian and prosaic individuals end up historically defining who is a genius and who is not?”  Barzun’s replies make this publication of the “The Paradoxes of Creativity” preferable to those versions where the text stands alone, though Jacques has better company in Best American Essays 1990. 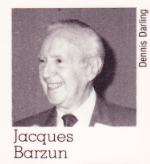 The examples given to amplify or clarify his points after the talk, like much of Barzun’s thought, can jar listeners or readers into reconsidering reputations and “accepted ideas”:  “I read Shelley, but I haven’t a single friend who thinks that Shelley was a good poet.  The whole Academy of Arts and Letters would sign a document saying he was not a good poet.  My good friend W. H. Auden abominated him.  He said there was no poet he detested more than Shelley, unless it was Racine.  Those are the real opinions, but, of course, in the schools and textbooks and conventional talk, Racine and Shelley are great names.  Somehow that doesn’t seem to me good enough.  I think the only real admiration consists of direct enjoyment.  Look at the way Mahler has come out of the ground after an unconscionable time.  I continue to dislike Mahler, but I am glad that he is out in the open to be shot at, as well as enjoyed.”  Dashing expectations in this way may be an impediment to Barzun’s popularity.  Critical conclusions aside, his ability to articulate his views provides me with direct enjoyment.

Anyone who ponders “The Paradoxes of Creativity” (in any version) will find Barzun’s familiar – but still wondrous – gift for divining intended meanings.  He reviews the history of “creation” and discerns four layers of value in contemporary usage of “creativity.”  An amateur botanist’s hobby and the shortstop play of Ozzie Smith provide illustrations of attitudes that prompt the broader usage.  The consequences of loosely applying the word are significant:  “It has not only diluted the meaning of creative, but it has also glutted the market with innumerable objects and performances arbitrarily called art, thereby making it even more arduous for true creation to find a public.  Still, more generally, creative foolery has been distorting, denaturing, destroying the fund of culture amassed since the Renaissance.”

Barzun had already come to the conclusion that he would pronounce a dozen years later in From Dawn to Decadence:

The impulse and the clever deeds [putting a mustache on Mona Lisa] are part of an irresistible historical sweep.  Some of us might prefer to live in a time of construction, which has a different kind of excitement.  Let no one repine, however.  Rebuilding is bound to come, because true creative power is a phoenix, and the forces of destruction are clearing the space for its new flight, none can tell when or where.  Meantime, if we are to recognize the bird when it appears, let us not forget that creation means making something new and making it out of little or nothing.

Michael Murray’s splendid new biography of Jacques Barzun recounts an unexpected instance of frivolity in a Columbia University psychology course taught by young Mortimer Adler.  Although working on a Ph.D. in psychology, the inexperienced instructor (a philosopher by predilection) had trouble filling class hours with appropriate content.  Teenaged Jacques one day proposed that the class step down the hall to finish the hour by playing ping-pong.  Adler acquiesced, and the lark turned into a frequent amusement.

Their rallies became more purposeful during the decades ahead.  By the time Adler moved on to the University of Chicago in 1930, Barzun was himself a Columbia graduate student and instructor.  Ten years later, Adler published How to Read a Book and Barzun drew attention to it with a critique in the Saturday Review, “Read, Do Not Run” (March 9, 1940, p. 6).  While praising Adler’s effort to make the riches of literature more accessible to the public – which turned the manual into a bestseller – Barzun finds the author inconsistent:

Curiously enough, what Dr. Adler rejects as a possibility for the living, namely, “two or more sides to a question,” he accepts for the great  dead of the European tradition, since he asks us to read with sympathy a grand list of great books from Homer to William James—a list that expounds at least half a dozen irreconcilable views of the world.

Adler’s capitalized “Great Books” would stir up trouble later, but his original goal was to include more people in what Jacques’ former teacher Mark Van Doren called the “great conversation.”  Barzun was a colleague in 1940, and in his sixth year of team teaching with Lionel Trilling a Columbia honors seminar with the more accurate, less contentious, even modest title of “Colloquium on Important Books.”

Three years later Adler conceived the idea of compiling Great Books of the Western World.  The 54-book set debuted in 1952 and also merited a Barzun review, this time in The Atlantic Monthly (December 1952, pp. 79–80, 82, 84).  He gives highest praise to the unifying Syntopicon, the first two volumes that cross-reference the rest of the collection, calling that pair “miraculous” and “a stupendous achievement.”  The Aristotelian Adler’s classification system permits readers to quickly find what the assembled authors have to say on a particular topic.  Those come from 102 “Great Ideas” (also parsed into thousands of subdivisions) which bring the authors to grips with each other.  The contents were another matter.

Barzun concludes – after presenting varied, ample and humorous evidence – that “the great books here gathered with so much love and care and public spirit betray a high-minded axe-grinding in the direction of intellectualism.”  The future author of The House of Intellect did indeed write those words, but only after regretting that the first edition of Great Books missed the opportunity to “unite a great variety of intellectual interests by choosing from the recent times not only Freud but Shaw.”  Barzun considers the collection unbalanced in a rationalistic direction:  “Shouldn’t we have had … Balzac and Henry James—instead of Hippocrates on Hemorrhoids and Archimedes on Spheroids?”

Barzun recalls Pascal’s distinction between “the spirit of geometry and the esprit de finesse” before offering these closing words on the first edition of Great Books:  “The search for geometrical propositions is admirable, but it would be disastrous if the unchecked desire for a canon of truth were to give us neither Montaigne’s humanist, ‘ondoyant and divers,’ nor Emerson’s American Scholar or ‘man thinking,’ but some sort of joyless, dehydrated western man in canonicals.”

Lesser men might have become sworn enemies after such a review.  Yet Adler would call Barzun a lifelong friend, with good reason.  Instead of abandoning Great Books of the Western World, Barzun worked to improve the second set (1990).  Editor-in-Chief Mortimer Adler later recognized the new edition’s Board of Editors – “especially Jacques Barzun” – who “made many recommendations of authors and works to be included or eliminated.”  Which works those were might be quickly determined by someone with access to the University of Chicago’s Mortimer J. Adler Papers (try boxes 26, 46, and 128).  But why let the mere likelihood of those letters’ existence spoil the fun of speculation?

Barzun almost certainly championed Balzac’s Cousin Bette, most likely for its portrayal of an artist’s life – and the conditions of making great art – woven into the story of unlovely Bette’s loss of him followed by vengeful machinations against her extended family.  Barzun’s pairing of the great French novelist with Henry James in the 1952 review hints that he would campaign later for William’s younger brother.  And I feel sure that Barzun pushed for Alfred North Whitehead’s Science and the Modern World.  Barzun’s reply to a National Book Award Foundation query about books that have influenced his work names Whitehead’s Science with four others, including Berlioz’s Memoirs and Mark Twain’s Life on the Mississippi.

Certainty, that elusive prize, does attach to at least one Barzun service to the second edition of Great Books of the Western World.  His 1952 review criticizes the first edition’s “conspicuous absence of any concern with the fine arts.  Except for misleading references among the ancients, one would not know that the west had seen the tremendous development of music and initiated the art of discussing it.”  Volume 34 now offers an imaginative work from the encyclopedic mind of Denis Diderot, Rameau’s Nephew, as translated by Jacques Barzun.  The title character’s uncle, Jean-Phillipe Rameau, was a leading Baroque composer whose treatment of harmony broke new ground.  The uproar it produced at first was forgotten as his innovations were gradually adopted and became part of the musical tradition.  Diderot’s characters take on music, genius, convention, criticism and many other topics in a satirical conversation of less than fifty pages – a joy to discover in the more easily read single column layout.

Barzun and Adler’s back-and-forth lasted for over half a century.  Not until the United States sent Forrest Gump to compete in China would table tennis have such import as when Jacques and Mort played Great Books ping-pong.